Skip to content
Summary
A brief history of US Energy.
The last 100 year history of US energy is a fascinating story… at least to me. But I’m primarily interested because I see the disturbing headlines of town and counties in part of our country: high rates of unemployment, rising poverty and the associated crime and drug use that goes with it. Along with those headlines is the narrative of industries, like coal, shrinking and dying and the finger pointing… primarily at environmental regulations and subsidies being showered on environmentally friendly energy sources, specifically solar and wind
The conflict is often positioned as a fight between jobs and environment; as if environmental industries somehow don’t employ people.

The reality is completely different and it’s well summarized by this graph anyone can go find on the energy information agency’s website. 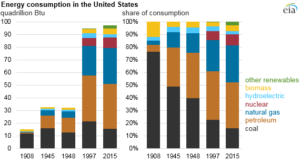 What has happened to coal over the past 100 years is very clear. It was first replaced by petroleum (1908-1950) and then later by natural gas (1950 – 1990 and then really accelerating after hydraulic fracturing made extracting natural gas much more affordable).
In the grand scheme of the American energy landscape, “other renewables” is barely a blip on the radar.
So from a policy perspective if you just eliminated ALL renewables, rolled back hydroelectric and banned biomass and you somehow prevented petroleum and natural gas from increasing market share, the actual improvement to caol would be less than 10% of the total energy pie. that would make 2016 look roughly like 1997 from a market share perspective.
THERE IS NO WAY BACK
The heady days of America being a primarily coal driven energy country are gone… over… forever. Unless you want to ban petroleum and natural gas as sources of power, forget it.
So when politicians talk about putting money into coal, it’s incredibly financially irresponsible as well as being cruel and dishonest to the people who work in that industry.
WHAT ABOUT EXPORTING
One other area that is discussed is exporting it. Sure, America is moving away from coal in what looks like a long term and permanent way, but what about other developing countries that need cheap, efficient energy?
Well, the obvious players here are China and India. For many years China did have a strong appetite for coal, but that peaked in 2013 and has gone down ever since.
And who can blame the Chinese. Their air quality is so poor they have to essentially close down cities. Do we really want to believe that significant investment in coal plants in the US today will translate into coal sales in China tomorrow? No way in hell.

What about India? Well, while that is a possible market, it turns out India has a lot of it’s own coal it can mine. And guess what… Indian miners earn a lot less than US miners. So unless the future of US coal is somehow extracting the coal for less than they can do it in India (including shipping costs and potential import taxes) there’s no future there either.

CAVEAT
I will say this. It’s POSSIBLE that some kind of new use for coal is discovered that previously doesn’t exist and can’t be predicted. It’s also possible that we run out of natural gas or petroleum before those sources are replaced and the reliance on coal comes back.

That sounds far fetched, but consider two examples from history.

Standard Oil’s primary product was kerosene for lighting households. That market was crushed by electricity as it became available which forced them to pivot to gasoline. Before the automobile gasoline was a dangerous byproduct that was considered worthless.

Similarly, during the early days of whaling, it was only the whale oil that was extracted, the bone was thrown away. It wasn’t until bone was used for making things similar to the way plastic is used today that it became valuable.

So there are examples from history where things that look like they are dying find a second life because of new uses. But those things don’t require intervention… the market tends to discover them.

WHAT ABOUT THOSE MINERS?
This is the really nasty issue. I’ve commented a lot about basic income and I still think this is a potentially good idea, but it’s also long term and doesn’t help people today.

There are longer term ideas, like investing in high energy wind farms in Western Kentucky. Those also required skill workers for both construction and maintenance and Western Kentucky has a combination of moderate the high winds as well as lots of land. It’s also a lot healthier to work on a wind turbine than in a coal mine, and the clean up costs are not quite as high. The problem, of course, is that wind isn’t all that efficient today so the economics don’t make sense…. but hey… the economics for coal don’t make sense either so if we’re going to subsidize maybe it should be in something future looking?

Another possibility is to focus on natural gas production in Kentucky. The major problem with this is that other sources are much cheaper to develop and extract.

The state itself also should look for future investments in high tech industry generally. Somewhat more outlandish thing like Pittsburg’s focus on self driving cars. The city essentially restructuring itself from steel to technology.

Right now Kentucky gets 85% of it’s energy from coal vs. the national average of 32%. I suspect this is because the industry has a lot of power and is desperately trying to cling to the past at the cost of the current and future people of the state.

I’m not picking on Kentucky. It’s a beautiful state with vast resources and some of the most breathtaking scenery in the country. It’s not fair that hard working people who spent decades of their lives doing back breaking work in dangerous conditions get the shaft because of long term economic trends beyond their control. It’s just as bad that they are being lied to and given false hope so that a small number of people can extract the last pound of flesh for their own enrichment.

I believe the way our of these situation is a combination of building for the future while exercising some compassion and care for people when they become victims of circumstances beyond their control. I actually think it’s entirely valid to declare a state of emergency in cases like this and treat the people in these areas the way we would people caught in hurricanes or massive fires. While those are “naturally occurring” disasters, they are just as devastating and just as difficult to control at the individual level.

Hi! I’m YOUR NAME. Thanks for stopping by. INSERT BIO HERE END_OF_DOCUMENT_TOKEN_TO_BE_REPLACED

Let me know what questions and/or feedback you have for me. I’ll get back to you as quickly as I can. Thanks! I look... END_OF_DOCUMENT_TOKEN_TO_BE_REPLACED