Skip to content
WARNING: INFLAMMATORY CONTENT AHEAD!
My reason for interest in this topic is primarily driven by the impact taxes have on most people of the world as well as the confidence that individuals have in taking any extreme position on the topic.
Just as random sample , here are some claims of the “rich paying more” position:

And here’s some saying the opposite: 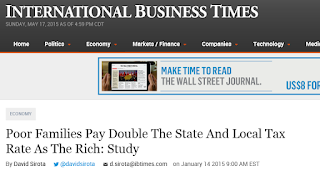 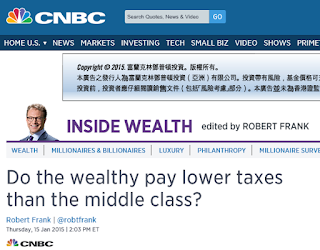 ﻿
﻿
I’ll let you google it yourself. It’s easy to come up with very confident and authoritive articles that will support whatever you want to believe.
So there you go… case closed. The rich and poor both pay more than the rich and poor…
…and that is actually true.
You would think that since taxes are fairly objective… that is to say, reported collected taxes is an objective measure, reported income is an objective measure; this should not be a controversial topic.

INTERPRETATION, ANALYSIS, INCENTIVES AND THE DATA ECHO CHAMBER
I think the primary reason for this is that most people are not really interested in whether or not the poor or the rich pay “too much” or “too little;” they are interested in affirming their bias. So I created a little matrix to represent this across two simple dimensions:

Ok, over simplified, but basically this breaks people into self-identified buckets that influences their perception and informs how they look for information. If you are rich and you feel “justified” about it, I suspect you will tend to find information that makes your tax situation seem unfair towards the “I pay too much” side, implying others pay too little. Conversely, if you feel “rich/unjustified” then the reverse is true. The situation if you are “poor” is not very different, although I suspect the # of people who deliberately fall into the “poor/justified” bucket might be small… I also think that the # of people who subconsciously feel this way might be pretty big; that is to say people who are poor and feel that they somehow deserve it.
So how does this play out? Well, if you’re rich and feel you “deserve it” you might type into Google “do the rich pay too many taxes” and boom… tons of support. If you are rich and “don’t deserve it” you type in “do the rich not pay enough taxes” and boom… tons of support for that too. Since the way search engines work is they echo what is sought after and avoid contrary positions; this can easily lead each side to believe they are objective and everyone agrees with them… cause… well… the data says so. How many people actually try to search for the opposite of what they believe and then compare the differences to check against their biases. That sounds hard!
And of course there is plenty of data to back up any position. For example, in terms of “total federal income tax collected by income bracket” the richer groups pay more in total receipts. That gives you graphs like this: 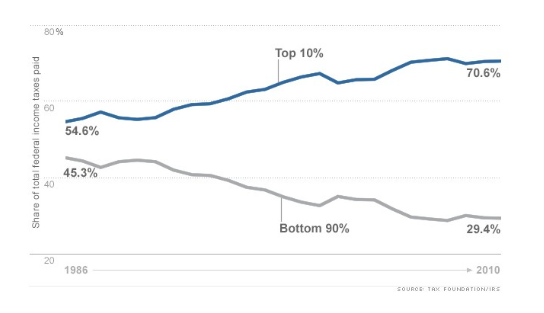 Wow. That’s pretty convincing. I mean, look… rich people used to pay just over half… now they pay over 3/4 of the taxes! Case Closed!!
But wait… something critical is missing… how was the total income earned distributed over that time period. Well, that question creates graphs like this: 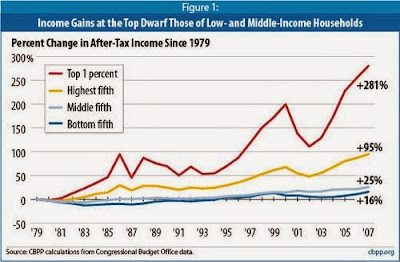 Aha! Now we’re getting somewhere. Those rich bastards have almost tripled their income, while their tax contribution has only gone up 20%. CLEARLY the poor are paying way too much.
Hmm… well maybe.
But hang on a second there professor… is it that the rich people got way richer at the EXPENSE of the poor, or was it that the subsequent fifths should have gotten richer as well but because of other things (that have nothing to do with taxes) they didn’t? Maybe there’s not enough welfare? Or maybe wage policy was bad? Or maybe it was all that outsourcing and we just haven’t figured out how to outsource Investment Bankers and CEOs… yet!
CORPORATE BASTARDS – I KNEW IT!
Next up, we can look at the SOURCES of tax revenue over time which makes charts like this one: 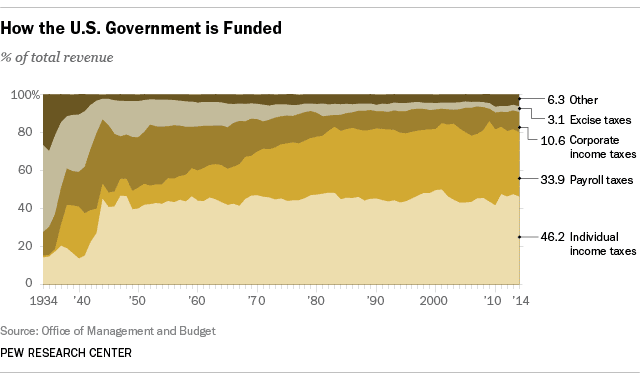 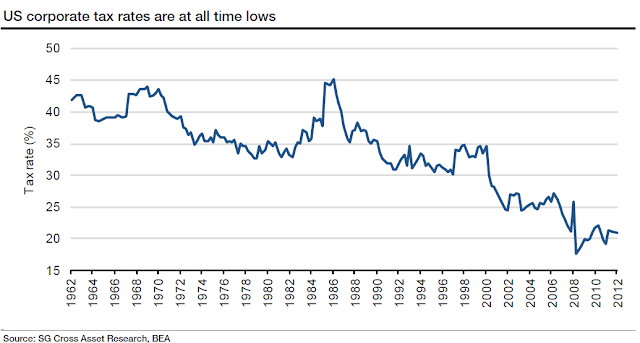 Aha! It’s those bastard evil corporations that are using their huge might to suck up all the money for themselves. No doubt they are filtering that revenue to those upper 1% earners as well. Now it all makes sense…
Well… maybe.
But maybe… as companies globalized their sources of profit got broadly distributed to other countries… other countries where they owe taxes to THOSE governments. Consider things like companies trying to repatriate money or moving their corporate headquarters to countries with friendlier tax laws.
Back in the 1960s and 1970s the US was much more of a self-consuming market. So it just isn’t this simple… During that same time the US’ trade deficit has also exploded. Well… it turns out when you import most of what you consume; your corporations aren’t paying taxes on the development, manufacturing and distribution. And if they can figure out a way to make that stuff cheaper AND pay less taxes… it makes sense that they will try and do that, right?
Let’s be honest, all those iPhones and iPads are not being made over in Cupertino. At least not right now.
As much as we want this to be a simple problem… it isn’t. And that makes it so that anyone with an axe to grind can make the picture look however they like.
LET’S LOOK A BIT DEEPER
So, what’s really going on here?
Something that became very clear to me is that regardless of their position on the topic, people had a very similar approach to taxes.
We see taxes are a weapon that you use AGAINST the “other” group as opposed to a neutral mechanism that helps distribute large but necessary public costs as equitably as possible across the population.
Very few articles talk about taxes as a process by which we fund important things like: infrastructure, defense, education, health, etc. Instead it’s almost always either:
a) a platform to complain about how someone else has it better than me or has something they don’t deserve
b) a platform for complaining about how a political party or individual I disagree with is an idiot
One thing that people seem to be unified on… OTHER people don’t pay enough taxes whereas I, of course, pay too much.
That is… the system is unfair: 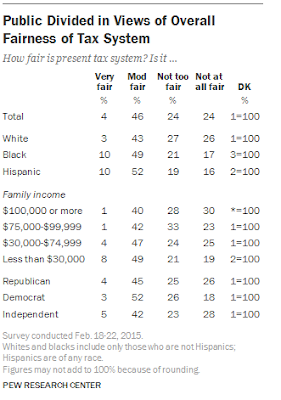 ..and there is definitely a relationship between how much you pay (in absolute terms) and how unfair you think it is.
This is pretty unhealthy, in my opinion, and what is at stake is our ability to create a functioning society.
Personally I don’t see taxes as bad or good, nor do I see them as a weapon that should be used in class warfare. There are plenty of other class warfare weapons that are perfectly legitimate and probably more effective: minimum wage, employment laws, social security limitations and payouts, welfare reform, and so on. And those are equally fun to debate!
CONCLUSION
I think when we think and talk about taxes we should try to look at it from two perspectives:
1) Which programs/projects/institutions benefit from public ownership and support and which don’t.
2) How can we distribute the costs of those programs/projects/institutions in such a way that the wealth of the payer is proportionate to the cost they bear.
That means we need much more debate and transparency around what (1) actually is. I suggest an itemized list of public projects/programs/institutions, their associated cost and each person’s “share” of that bill. So basically I know that when the DOD buys a stealth bomber, I paid $4.89 for it, and I can then look at where I spent my money and decide where I think it makes sense and use that to inform my voting behavior.
Maybe I think that an extra Grade Vanilla Latte would have been much better than a stealth bomber… or maybe I’d be willing to forego that extra 24 pack of diet soda so that we can fix some of the crumbling bridges. Ultimately those are the decisions that we are making, but they are so buried that we don’t think about it this way.
In this way we can see taxes as a way to get maximum benefit from public contribution to important projects that we all need as opposed to this evil institution that is just sucking up all our money and giving it to others far less deserving than ourselves.
﻿
﻿

Hi! I’m YOUR NAME. Thanks for stopping by. INSERT BIO HERE END_OF_DOCUMENT_TOKEN_TO_BE_REPLACED

Let me know what questions and/or feedback you have for me. I’ll get back to you as quickly as I can. Thanks! I look... END_OF_DOCUMENT_TOKEN_TO_BE_REPLACED